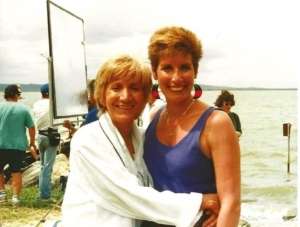 Olympia Dukakis & Personal Asst. Bonnie Low-Kramen on the set of “Over the Hill” in Australia, 1991

“I just want to be a good plumber.” This is how Olympia Dukakis approached her craft of acting. Her job was to put all the parts of a character together and to make it solid and strong. And, it wasn’t enough to give just one or two great performances a week. A “good plumber” delivers a great performance eight shows a week for the run of a show. That’s what good plumbers do. Her commitment to excellence in all details mattered. No leaks. Olympia thought of all professions like this.

As an assistant, I became a good plumber too. I worked to be as great an assistant as Olympia was an actress and I wanted to do it not just on some days, but every day. I realized that’s what “ultimate assistants” do.

For 25 years, I had a front-row seat supporting an extraordinary woman who powerfully touched millions of hearts and minds. Olympia Dukakis went from working as a respected New York City theatre actress whose name her agents advised her to change because it was too ethnic (she refused), to an internationally known and adored movie star who became an easily pronounced household name. Olympia catapulted to fame in a matter of months. I was by her side for all of it. And speaking of names, she was “Oly” and I was “Bons.”

Olympia’s life changed forever by her Academy Award for the film “Moonstruck,” and so did mine. What a ride. It is everything you think it would be and a whole lot more. And I learned. Wow, did I learn about show business, about being a working woman, about making hard choices, and about life. I wouldn’t have traded it for all the world.

When I started working with Olympia Dukakis at the Whole Theatre in January, 1986, I was hired as the PR Director. No one got hired without Olympia’s approval and so my interview was on a snowy night since that was the only time she had. We liked each other right away and she hired me on the spot. I was impressed by her obvious authority as Producing Artistic Director. She wore her power without apology which was a lesson right there. There was no question that she was in charge and I thought that was very cool as a woman running a theatre. I had no idea what would happen after she asked, “When can you start?”

My job was to write press releases about the plays we were presenting which included classics by Chekhov, Shakespeare, and Williams and musicals by Kander and Ebb. As an English and Theatre major at Rutgers University, this job was perfect for me. This job also meant that I had to spend a lot of time with Olympia and the whole creative team. Perfect.

We began. Neither of us dared to think our work together would last for 25 years which leads me to one of the first lessons I learned.

Olympia showed up for her family, her friends, her students, her fans, and for me. In 2004, I gave Olympia the final draft of my book “Be the Ultimate Assistant” to review and offered her free rein to take out anything she did not like. She called me two days later and said, “Bons, you really have something here. Don’t change a word. Oh, and I’ll write the Foreword.” She did.

Olympia Dukakis may be gone but not really. Not for me and not for so many others. How do I know?

In the hundreds of emails I received after Olympia’s passing away on the morning of May 1, 2021, many of the messages said, “You and Olympia had something so special. You were very lucky.” The thing is that I don’t want our partnership to be a unicorn. We were tested many times along the way and we worked very hard to address the challenges and move on stronger.

If you are reading this, I hope you have a partnership that is mutually respectful and that you both feel truly supported. If you don’t, I hope some of these lessons will help you get there.

I am Bonnie Low-Kramen, TEDx speaker, author of “Be the Ultimate Assistant” and trainer of Executive Assistants all over the world. In May, 2019, I was featured in a Forbes online cover story. As part of the research for my second book about the workplace to be published in 2022, I have had over 1,000 conversations with assistants, leaders, HR professionals, recruiters, and business school professors. I have worked in 14 countries and 38 states and would love to work with you towards building your ultimate workplace. Click here to set up a time to speak with me about your training needs which can be delivered virtually or in person.

This article first appeared in Executive Support Magazine, a global training publication and must read for any administrative professional. You can get a 30% discount when you subscribe through us. Visit the website at www.executivesupport.com to find out more or to get your 30% discount email subscriptions@executivesupport.com and tell them we sent you.

Ep. 52. Bonnie’s Global Birthday Celebration on Heads Together with Bonnie...