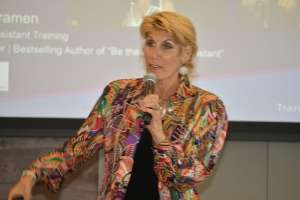 Equal Pay Day of 2019 hit me harder than in other years. It is because the data shows that the economic situation for women just got one penny worse compared to last year. How can that be and more importantly, what do we do to move us in the direction of closing the wage gap rather than widening it?

In the 14 countries where I have traveled to speak and teach, I know that many women are severely underpaid throughout the world. While the reasons for this are complicated, one of the most glaring is that the subject of money is considered secret and forbidden and taboo to discuss.

Yet, it is one of the most burning topics in my teaching. I will ask this question: On a scale of 1-10 with 10 being the most, how much stress does the subject of money cause you? Without hesitation, my students shout back, “10!” “12!” and a rare few shout numbers lower than 6. This is how I know what a big problem we have.

This secrecy and silence is hurting women. In general, women feel alone and ill-equipped to negotiate compensation on their own behalf. I meet too many women who have a hard time making ends meet, and yet feel desperate to solve the problem.

Contrary to common beliefs, the wage gap is not a women’s problem. It is a human problem that is impacting families globally.

When we break the silence to actually talk about realistic way to approach negotiation, the stress levels automatically come down. Strategies, such as creating a written proposal outlining your current situation and justifying the changes using data and metrics, actually work. The documents do the talking for you before you ever have to have the verbal conversation which many women are loathe to have.

Here’s a true story. One of my students has a strong relationship with her executive who is the owner of the company. She did her research and found out what her salary should be in her geographic market given her responsibilities and experience. She created a document sharing the data and outlining her value to the company. When her executive read the document, he was mortified and embarrassed. He said he had no idea how grossly underpaid she was. The executive set the wheels in motion to adjust her compensation and thanked her for bringing it to his attention. This decision not only resulted in a $20K increase but a plan for some retroactive compensation and future increases.

The assistant’s life is now changed for the better. The silence is broken. She is now determined to help others make the money they deserve.

The bottom line is: You don’t get if you don’t ask When we ask in the right way, we get.

If we truly want to turn this ship around, we must find mentors and training to teach women how to negotiate and to advocate for themselves with confidence. This is a new skill for many women and step number one is to break the silence around the issues of money. It’s time to shine a light on money and to keep the conversation open and honest between leaders, HR, and staff until the wage gap is closed.

What Do We Do Now About Sexual Harassment & Bullying? Bonnie Low-Kramen...