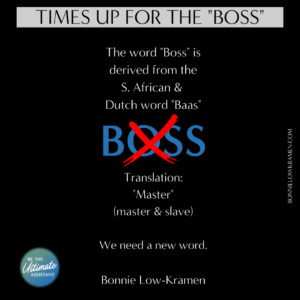 “No matter what anybody tells you, words and ideas can change the world.” – John Keating

I admit that ever since I was a working person from around age 12 as a babysitter, I have had a problem with the term “boss.” Hearing it makes me cringe. It always struck me as a negative and demeaning word – and for good reason. Because it is. At least in the definitions that apply to the workplace and to the people who supervise others.

Did you know that the origin of the word comes from the Dutch word “baas” which translates to mean “master?” “Boss” was first used in the 1660’s in the Dutch settlements of colonized America. “Boss” started being used because of the American aversion to the word “master” which was commonly used in England. So it seems that the word morphed out of a need to avoid more humiliation. The word became the lesser of two evils.

It’s time to move on.

Let’s take a closer look at the word according to Merriam Webster and how it is still being used.

In every case related to the workplace, the connotation is negative. At conferences all through the U.S. and in 12 countries, I typically tell audiences early on in my presentations that I am not a fan of the word “boss” and I tell them why. I get to see the idea “land” in their body language and the recognition in their eyes. The idea resonates powerfully as they feel why they don’t like the word either. What I experience during Q&A is that my audiences easily and happily choose to find substitute words to describe the men and women who are their leaders. Change can happen in minutes if we intentionally choose it.

Can we really just decide to stop using the word “boss”? In a word, yes. Just like the words “ice box,” “dungarees,” and increasingly “secretary,” the time has come to retire the word “boss.” As in today. As in, “Boss, I’ve called you in to say that today is your last day. You’re being replaced.”

By what word, you may ask? By more relevant and respectful words like:

Editors and writers might be reading this right now and wondering what short 4-letter word to use for snappy headlines? What about “Exec”? Surely we can solve this if we believe it is important enough.

Humans often do things because we always have out of habit, right? Times have changed and I see that it is time for a new normal. I see a world without the word “boss.”

The working professionals of the world get it because they understand the history and the innate negativity of the word because it doesn’t stop at just words. What often comes along with those definitions are the actions of workplace bullying, sexual harassment, and demeaning behaviors.

The data is crystal clear that the way to inspire the best long-term work from staffers is to not boss them around. People quit people, not companies. In our 2018 workplace, the #MeToo, #TimesUp and #HandsOffPantsOn movements are real ‘things’ that are exposing the rampant harassment and bullying epidemics going on globally. The bright light is shining on company culture and the way humans relate to one another. Intimidation and bossing are not effective long-term management styles.

In a recent survey by Google, the results revealed the top 5 things that staffers want most in the workplace and none had to do with money. The number 5 result was Psychological Safety. Staff wants to feel respected, valued and that they belong which is the antithesis of management by intimidation. This survey result is consistent with what I am seeing and hearing all over the world, from S Africa to Dubai to Scotland to New York City.

Keith Passwater, SVP Corporate Finance & Chief Actuary, of Anthem has this to say on the subject. “I have disliked the word ‘boss’ due to the connotation of ‘bossy’ and agree that that the workplace would be better without it. I well remember some of my early leadership disasters – situations where I felt this intense accountability for and authority over someone else. As a result of my own fears and insecurities (and maybe a lust for power), I drove people into the ground with micromanagement and offered them little help in clearing obstacles. Although, at times, we achieved some remarkable results, my leadership sewed seeds of deep insecurity, low productivity and general misery into my teams, resulting in high turnover and a well-deserved reputation as a terrible boss. Now, my goal isn’t to control or boss my team members; it’s to inspire and equip them to do their best toward our assigned objectives.”

Doing what I am proposing would mean taking a fresh look at the written language on company websites, job descriptions, social media posts, and most of all, at the way we speak about and to one another.

In 2014, Sheryl Sandberg worked to ban the word “bossy” since it is a word only used to describe females. I am a huge fan of Sheryl, her book “Lean In,” and this Ban Bossy idea. I want to take it a step further. Will you participate? 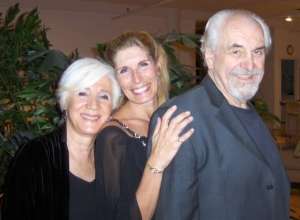 For 25 years, I worked as the Personal Assistant to Oscar winner Olympia Dukakis and her husband actor Louis Zorich. From the beginning of my work with Olympia, I felt uncomfortable using the word “boss” and so did she. I would call Olympia my “executive” or “principal.” Olympia would introduce me and say, “Meet Bonnie Low-Kramen. She works with me.” The “with” rather than “for” was subtle but it sent a powerful message to the listener. It is these kinds of intentional and respectful decisions that kept me happy and productively doing my job for 25 years.

Olympia had no desire to “boss” me around because it did not make sense to either of us. Rather, she saw our work as a strategic business partnership and a collaboration. As such, I had a seat at the table at important meetings and the opportunity to speak when I had something to contribute. I belonged there.

“Words are singularly the most powerful force available to humanity. We can choose to use this force constructively with words of encouragement, or destructively using words of despair. Words have energy and power with the ability to help, to heal, to hinder, to hurt, to harm, to humiliate and to humble.” Yehuda Berg

The workplace of 2018 has never been more demanding and is crying out for this change. This could be a singularly historic landmark moment. The word “boss” no longer has a role in our modern workplace. It’s our choice. This change will make a difference for our daughters and sons and beyond. We are worth it, aren’t we?

I am Bonnie Low-Kramen, TEDx speaker, author of “Be the Ultimate Assistant” and trainer of Executive Assistants all over the world. As part of my work to build ultimate business partnerships,  I was featured in a Forbes online cover story. In the research for my second book about the workplace to be published in 2022, I have had over 1,000 conversations with assistants, leaders, HR professionals, recruiters, and business school professors in 14 countries and 38 states. I am excited to work with you towards building your ultimate workplace. Click here to set up a time to speak with me about your training needs which can be delivered virtually or in person.

Win a Full Scholarship to Be the Ultimate Assistant with Bonnie & Vick...

The State of Assistant Training: Where Are We? | Ep 26 (Part 1 of 3)
Join Bonnie's Community