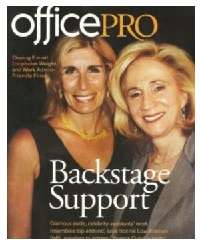 As seen in Officepro Magazine | July 2016

By Bonnie Low-Kramen, IAAP Member since 2009, author of “Be the Ultimate Assistant”

My why? Since 95-98% of the world’s assistants are female, my why is to empower women all over the world.

It’s been twelve years since my employer Olympia Dukakis (Oscar winner for Moonstruck) and I were honored to grace the cover of officePRO magazine. We were the first assistant/employer partnership to ever make the front cover. It was a very proud moment for both of us. About our relationship, Olympia was fond of saying, “we earned each other.”

For 25 years, I worked with Olympia as her Personal Executive Assistant. In 1988, we went through the Academy Awards, the presidential campaign of her first cousin Michael Dukakis and the birth of my son Adam – all without a computer or the Internet. The truth is we winged it every single day.

In 2011, I made the now or never decision to resign from one dream job to take on another. I designed the two-day workshop for assistants that I wished had existed when I first started with Olympia. Based on my book, it is called “Be the Ultimate Assistant” and I now teach and speak all over the world. Never in a million years did I think that my frustration over the lack of resources for top level assistants would take me to London, Paris, Dubai, Johannesburg, Auckland and dozens of American cities.

Vickie Sokol Evans teaches 4.5 hours of essential technology and productivity in BTUA including MS Office and social media. We know that for assistants to succeed in 2016, they need both superior soft skills and hard skills. To have one without the other spells failure. I admit that if I were beginning my work with Olympia Dukakis today, I would fail without additional training on top of my degree from Rutgers.

With a maximum of thirty students, we tackle the tough issues of salary negotiations, finding your voice, ageism, the need for ongoing training, and the global epidemic known as workplace bullying. These issues can make or break assistants. We provide a safe place for like-minded assistants who travel from all over the world to find mentors and to be mentored.

What I love about my work is the visible transformation that happens when assistants are empowered with focused training specific to them. My favorite piece of feedback is, “I am so inspired to go back to work. I have found my voice. You and Vickie have changed my life.”

What’s not to love about that?

My point of view on the assistants of the world is that they are capable of pretty much everything, as long as they are supported with solid professional development and by one another. I begin most workshops with this quote by Margaret Mead.

“Never underestimate the power of a small group of committed people to change the world. In fact, it is the only thing that ever has.”

True story. Here’s to changing the world for the better.