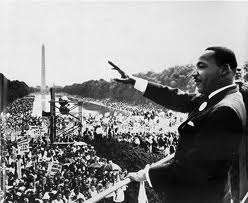 By Bonnie Low-Kramen for Glassdoor.com
September 5, 2013

“Our lives begin to end that day we stay silent about the things that matter.” Martin Luther King Jr.

I have no memory of the events of August, 1963…I was six years old. But on the days around August 28, 2013, I was glued to the coverage of the 50th anniversary of the civil rights March for Jobs on Washington and Dr. Martin Luther King Jr.’s legendary “I Have a Dream” speech. To read the full speech:
http://www.archives.gov/press/exhibits/dream-speech.pdf

I am moved and inspired by all of it. Moved by the images of 250,000 people of all races and ages who descended on Washington, DC with a common purpose and they did it through the social media at the time – word of mouth, telephones, radio, television, and places of worship. Not a tweet to be found and yet they came. Nine months in the planning, the March was a logistical challenge of communication and transportation of the highest order and the stakes had never been higher. The determined looks on the faces and in the eyes of the marchers said it all. There was no other place on Earth they would rather be on that day.

Dr. King’s profound words about the quest for justice, equality, freedom, and dreams live within us despite having been spoken 50 years ago. We’ve come a long way in 50 years but we still have a ways to go to that “mountaintop.”
When I listened to Dr. King’s words about being judged by the “content of your character, “my mind moved to our modern workplace. There too, we have come a long way in 50 years. In both cases, the dreams yet to be manifested are rooted in respect, acknowledgement, and doing the right thing.

1.    Dream of Zero-Tolerance for Bullying
I dream of a workplace where bullying and leading by intimidation is no longer tolerated or considered sanctioned behavior. Rather, it is taboo and grounds for sanctions against it. Destructive acts such as yelling, public humiliation, and unfair treatment are tearing at the fiber of productivity, morale, and employee retention in our current workplace. At the heart of the matter is the core value of respect – respect for all employees at every level, women and men alike. This will require a debate on the definition of bullying at companies across our country. That would be a good thing. It’s time.

2.    Dream of equal pay for equal work
I dream of a workplace where women are paid the same salaries as men for performing the same job. As of the 2010 Census, women are paid .77 cents for every dollar paid to men. The good news is that recent reports show the numbers are improving. (Source: Lean In by Sheryl Sandberg http://www.amazon.com/Lean-In-Women-Work-Will/dp/0385349947
With more women than men graduating from college and with the workforce being more than 50% female, we need our leaders to take a hard look at compensation packages.

3.    Dream of building strong leaders
I dream of a workplace that enthusiastically and actively invests in leadership education for both managers and staff. Great leaders are made through education and practice. We are in more need than ever of leaders who are ethical and have integrity to stand up for what is right in a time when every misstep is reported on the evening news. Too many companies have a revolving door of staff which is an indication of deficit leadership. Leadership training can begin its strong foothold in business schools. The most successful companies will be the ones with the most trained staff and a more balanced representation of women as CEOs and on Boards of Directors.

When we accomplish these dreams, I envision that the workplace will be positively transformed and known for transparency, non-discrimination, and commitment to fair practices.

August 28, 1963 showed the world how to stand up for what is right and what happens when enough people dream the same dream. The world has never been the same.

What are you dreaming for your workplace?

How to Find & Keep the Perfect Assistant – 11 Things to Know

10 Ways for Women to Lean In
Join Bonnie's Community