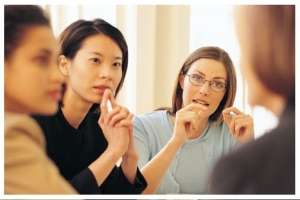 The winds of change are in the air.

Sheryl Sandberg, 43, is the COO of Facebook and she has been shaking up the business world with what she is saying loud and clear about what women need to do and not do to succeed in 2013 and beyond. Her best-selling book, “Lean In” is causing whole companies to take a fresh look at the professional working relationships between women and men. Sandberg says, “A world where men ran half the homes and women ran half of the offices would be a much better world.” Imagine that.
We live in a world where this is possible. What it will take will be to sit at the table next to men, lean in, and speak up with confidence and ambition. What it will take to be heard and heeded is to fight the persistent stereotypes and perceptions which diminish women. One reason stereotypes exist and persist is because, as much as we don’t want to admit it, there is usually an element of truth in them. If something is perceived as truth, then it becomes real even if it really isn’t. Perception morphing into reality can be a self-fulfilling prophecy but only if we allow it. Here are two:

Only you know if this perception is true in your office and in your life. Experienced professional women nod their heads when I talk about the need for women to help other women in the workplace. They agree it makes complete sense, but that it is a real problem nonetheless. The reality of our ever-changing workplace is that there is too much at stake to behave in an isolationist or contentious, competitive manner. Who has not been witness to the passive/aggressive behaviors between women? It is simply not possible to do excellent work when this dynamic is in play.
Women need each other in the workplace. Let me be clear. Women don’t need to be personal friends with everyone in the office. Women do need to nurture positive, respectful, and professional relationships with everyone in the office. Two heads are most definitely better than one. The LinkedIn discussion groups are a beautiful development for women. Sharing information in this non-threatening way is a win/win situation and everyone benefits.

Networking, building healthy professional relationships happens most effectively when we generously and enthusiastically help someone out. Then when you are looking for a new job or a solution to a time-sensitive problem, you have many people to call upon who are inclined to help you. Women remember those who help. Don’t you? Sandberg has brilliantly created www.leanin.org to offer women a fast-track to supporting one another.

Perception #2 – Women suffer in silence. We don’t speak up even when we know they should.

Psychologist Dr. Maddy Gerrish comments, “The major barrier stopping women from succeeding in the workplace and in their lives is the lack of trust in their own intelligence, judgments, and abilities. When women permit jealousy, competitiveness, and fear to immobilize their voices, creativity is stifled and the ability to act is thwarted. Conversely, when a woman trusts herself, the result is confidence, empowerment, and self-esteem. Women must be aware of these issues in play in order to make the necessary changes.”

Women are socialized as young girls to not assert themselves or be confrontational.

We are trained to be conciliatory, pleasers, “good girls,” and peacemakers, almost at any price. Women have strong intuitions, but are not encouraged to act on those instincts. Women of all ages openly say, “I will do almost anything to not have to confront someone.” This deeply rooted societal training creates a system, an environment ripe for disrespect, people taking unfair advantage, and at its worst abusive behavior. If women permit themselves to be treated badly, however it manifests itself, the first thing that is sacrificed is self-esteem. Women justify silence by saying, “I can’t afford to lose my job.” I say that you cannot afford to lose yourself.

It is not possible to erase socialization, but it is possible to manage it and not be victimized by it. Positive confrontation is a learned skill. It’s about choosing your battles and your words carefully. Thoughtfully taking the risk to speak up can have surprisingly positive results. One of them is your own professional growth and respect from your employer and peers.

The fear factor cannot be underestimated when it comes to the problem of women speaking up to anyone, but especially to colleagues and employers. I have colleagues who have been assistants for 25+ years and are serious, dedicated, and experienced administrative professionals. It is important for us to notice that even they, with all their years of “been there, done that” experience, are sincerely reluctant to speak up in many situations. The fear is about stepping on toes, overstepping boundaries and the resulting negative repercussions. They choose to stay silent and engage in time-consuming, energy-wasting underground complaining and worrying rather than take the risk to speak up. In light of all of this, speaking up still feels too dangerous and filled with potential for failure and backlash.

I understand this dynamic because early in my career, I was silent too. My former employer and mentor of 25 years, Oscar winning actress Olympia Dukakis reminds me that when we first started working together (I was the PR director at the theatre she ran in New Jersey), I did not speak. It’s true. For the first few months, I was afraid to appear uninformed or unprepared. I thought it was safer to watch and learn. Olympia recalls that she would say to other staff members, “When is the tall one going to talk?” I learned from Olympia that it is important to speak up and say the hard things in a way that people can hear. Time and again I’ve witnessed the relief in the room when Olympia says the thing that everyone is thinking but no one wants to say. I had to learn this lesson in my personal life as well. In most cases, speaking up makes things better.

Things did get better for Susan (not her real name) one of my 40-something students in a “Finding Your Voice” workshop which took place on a Saturday. Susan has a boss who humiliates her in staff meetings and yells a great deal. After hearing stories from others and learning about proactive strategies, Susan decided that she would no longer hold back and suffer in silence.

On the Monday morning following our workshop, her boss began to berate Susan at the staff meeting. As the tirade began, Susan did something she had never done before. She calmly stood up and left the room. Her boss followed her and Susan told her that they needed to have a conversation alone and not in front of everyone. A week later, they had the one-on-one and Susan told her boss how these rants made her feel. Her boss said that she doesn’t “mean to be like that or ever wants to yell.” They cleared the air and the relationship is now changed for the better. Mainly, Susan has reclaimed her self-respect by standing up for herself.

A few days later, Susan wrote me to say that she talked with her 70-year old mother about what she learned at the workshop about speaking up. When her mother was confronted by a verbally abusive relative on the phone, her response was, “If you keep speaking to me that way, I am hanging up,” which she promptly did. Then she said, “I’m doing what Susan told me she learned to do.”

As Susan found out, there are positive ways to assert which keep the lines of communication open and hostility-free. The trick is to not wait until little problems escalate into a big one. Directly asking, “What are you worried about?” or “I see you are concerned. Tell me what you think.” The result is an ongoing dialogue and an effective use of time since no one is staying silent out of fear. Lack of silence equals minimal surprises and reduced stress.

Rebecca Shambaugh’s book It’s Not a Glass Ceiling, It’s a Sticky Floor explores the idea that women hold themselves back both intentionally and not intentionally. She outlines how women sabotage themselves. She echoes Sandberg’s message that our lives as working women are profoundly complicated with balancing our children and families with our careers. These problems are real and valid and almost impossible to navigate without involvement from our employers, families, friends, and colleagues. The women’s movement told us that we “can have it all.” Yes, that’s true. We just can’t do it alone.

The wind is changing. Can you feel it?
Original article published August 5, 2013 by Bonnie Low-Kramen http://bit.ly/1kbATDG

Hire the Attitude, Train the Skills