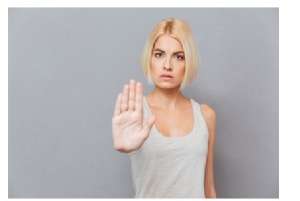 By Bonnie Low-Kramen for Glassdoor.com  Jan, 2014

“I’ve been absolutely terrified every moment of my life – and I’ve never let it keep me from doing a single thing I wanted to do.” -Georgia O’Keefe

FEAR (definition): A distressing emotion aroused by impending danger, evil, pain, etc., whether the threat is real or imagined.

As I train assistants from San Francisco to South Africa, I am struck by the common themes that burst forth – and usually within moments and with stark honesty. One of the most loaded themes is fear. That is why it did not surprise me when I read that Spencer Johnson’s (“Who Moved My Cheese?”) quote, “What would you do if you weren’t afraid?” hangs prominently on the office walls at Facebook which employs some 4,000 people.

The evidence is clear and indisputable. Even the smartest and most successful among us allow fear to slow us down and sometimes stop us dead in our tracks. Apparently Mark Zuckerberg and Sheryl Sandberg know this and have decided to openly encourage their staff to face their fears and take the risks, even if it means making mistakes. Very smart.

Here are the top six workplace fears and how to move past them.

1. Fear of losing your job

2. Fear of looking stupid or being wrong

3. Fear of being yelled at

4. Fear of stepping on toes

5. Fear of appearing a know-it-all

And the biggest fear of all…

6. Fear of speaking up

But first, a success story:

Susan decided to finally face the fear of her CEO boss by breaking the pattern that had been in place for over a year. She now says, “I wish I had acted sooner. Everything has changed.”

The CEO is a “yeller” and regularly berates Susan in their weekly staff meetings. The next time it happened, Susan decided that she was going to take action. As the tirade started on Monday morning, Susan did something she had never done before. She calmly stood up and left the room. Her manager followed her out of the room and asked why she left. Susan told her that the yelling had to stop and that the two of them needed to have a conversation alone. A week later, they had the one-on-one and Susan told the CEO how these rants made her feel. Her surprised boss said that she “had no idea” the behavior was causing a problem but appreciated the clarity. They cleared the air and the yelling has stopped. Susan has reclaimed her self-respect by facing her fear and standing up for herself. Fellow staffers have noticed the difference in both of them.

One of the main points about this true story is that sometimes people are oblivious to their own behaviors and will only know if someone tells them.

The most talented staffers can be undone from fear. Many fears are irrational but even so, are made real if we make them so. Fear can cause feelings of helplessness, depression, worry, distraction, sadness, resentment, and panic, just to name a few. Is it possible to produce excellent work if you are feeling any of these things? No, which is why there are many more pros than cons to facing your fears.

Let’s take them one at a time.

1. Loss of job. Nine times out of 10, it won’t happen. If you are viewed as someone who is working for the good and profitability of your manager and the company, you won’t be fired. If you address issues proactively, calmly, and with fact-based solutions, you will be seen as an asset and not a liability. Be the one who walks towards a problem rather than away from it and you’ll be the one who is still employed.

2. Looking stupid or being wrong. Make it your business to read the same publications/websites and watch the same news programs/shows as your manager. These include your company’s website, social media posts, and the Annual Report. Doing your homework will not only alleviate your fears but also makes you more relevant and valuable to your manager. Even so, know that you may still end up being wrong from time to time. Who isn’t? Own it, learn from it, and move on.

3. Being yelled at. All of us seek approval and acceptance. Being yelled at can undermine any good will developed in the workplace. Any effective leader will not tolerate yelling. If and when it happens, it is important to address it immediately. One strategy is to stand up, say “This is obviously not a good time to talk,” and leave the room. This sends a strong message that this is not okay. Another strategy is to look the person straight in their eyes and say, “In order for us to work together, we need to show respect for one another.” Another way is to say, “Ouch.”

4. Stepping on toes. The best way to combat this fear is to not assume and directly ask, “Would you like my help on that project?” or say, “I have some ideas about how XYZ can play out. May I share them with you?” or “Would I be interfering if I did ABC?” You don’t know if you don’t ask. Most people appreciate being asked questions and offered choices so they feel a measure of control. No one likes surprises of this nature.

5. Appearing like a know-it-all. Many staffers downplay their abilities and accomplishments because of the fear of coming across as a know-it-all.  Approaching others one-on-one to offer an empowering suggestion can be very potent. Avoid constructive criticism among colleagues unless asked specifically for it. The irresistible flip side is when you can offer a colleague a solution which will save them time or money or angst or better yet, all three. Again, always ask. “May I tell you what I see?” and wait for the go-ahead. When you help others be successful, your co-workers will be seeking you out for guidance and advice.

6. Speaking up. This is the #1 challenge in the workplace today. Bullying is epidemic and it is due, in large part, to the reluctance and inability to speak up. Managers and company leaders are reluctant to address the bullies, HR feels helpless without support from the leadership, and the staffers are suffering in silence because of the fear of confrontation. The irony is that most bullies fold when directly confronted.

Susan’s CEO boss was seen as a bully and changed her behavior when challenged. There are many more success stories like Susan’s. Breaking bullying patterns is important to jolting the attention of the bully.

The fact is that staffers are paying a serious price for tolerating bullying. High absenteeism due to stress-related illness, depression, and obesity are just three. Silence is the enemy.

Ask yourself what is the worst that will happen if you speak up? Practice saying the words with a trusted friend so that you are prepared.

So, what would you do if you weren’t afraid?